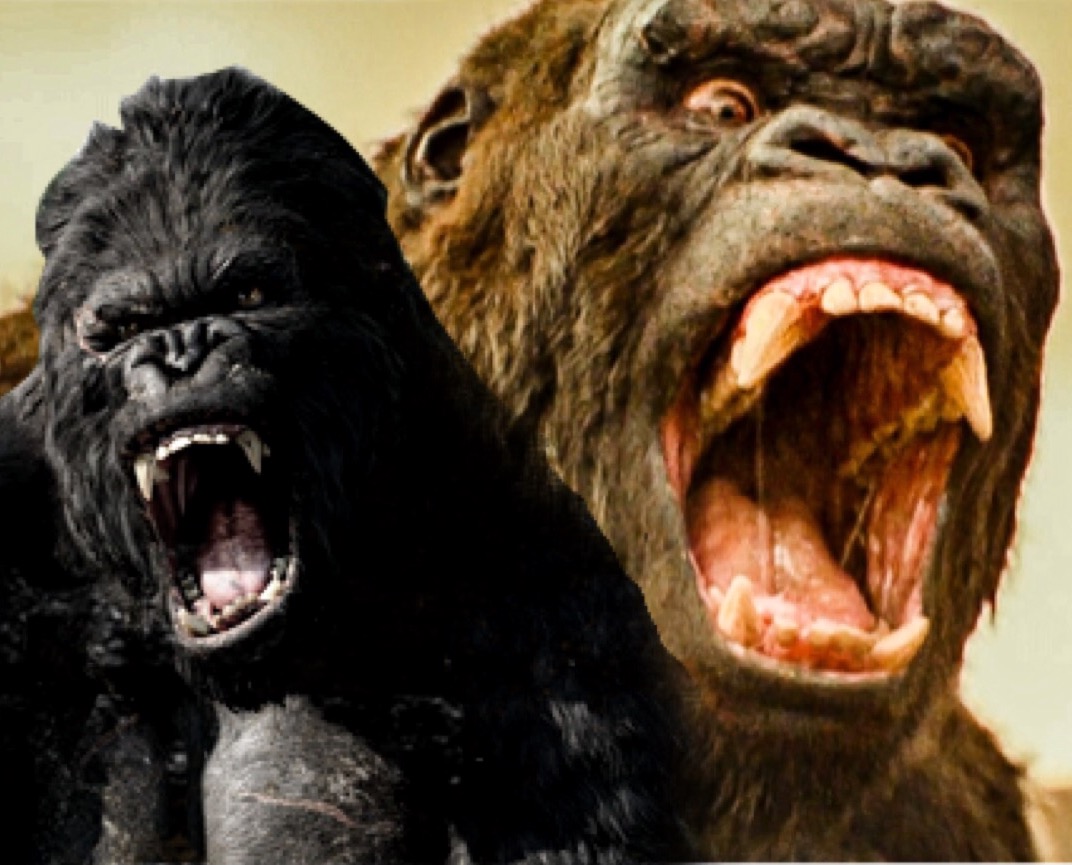 Today I’m doing something different from a combo review. I’ll being doing and old vs. new review comparing the previous and the most recent movies centered around everyone’s favorite giant gorilla. I don’t think I need to say anything else, so let’s get to it.

Now these are both very different interpretations of the island of giant creatures. It all basically comes down to cinematography and while Kong: Skull Island looks big, Peter Jacksons version looks gigantic. Add to that the amazing visual effects, backgrounds and set design for the indigenous civilization that lives on Skull Island and appear to worship Kong as some sort of god. And that’s another aspect that’s superior. The inhabitants are far creepier than the ones in Kong: Skull Island. The Peter Jackson movie’s version of the inhabitants come across almost cultish where as the scariest the inhabitants in the new movie get is when you first meet them. You’ll see what I mean when you see it. The other advantage the old version has is that while there are obvious and, literally, giant threats on the island, there are also times where it can be seen as a sort of paradise. Point goes to the old.

In a way, the creatures serve as the villains in a movies like these. In the old version, the creatures do pose a threat, but they’re pretty much just running on their natural instincts, even the T-Rex’s. Not to mention, they’re all just bigger versions of animals, except for the birds for some reason. However, in the new version, there’s a lot more creativity. Not only are there jumbo sized animals, but also strange creatures unknown to man. Primarily, the Skull Crawlers. These things are terrifying. There’s one moment in particular where they really got me. These things aren’t just animals following instinct. These things live to kill Kongs kind and anything else that stands in there way. This one more comes down to personal preference but I find the creatures in the new one a lot more frightening. Point goes to the new.

The Story and Characters

This ones a little tougher because both of these are solid movies. But in my opinion, it all comes down to why our casts of characters go to Skull Island. And While I sympathized with what the characters were going through in both films, I sympathize with the characters in the Peter Jackson version more. In the Peter Jackson film, Jack Blacks character just wants to film his new movie on an exotic land that no one’s seen before. They’re not interested in finding Kong or anything like that. They don’t even know what’s actually there. Simply put, they’re not looking for any trouble. However, in the new film, the characters, at least Samuel L. Jackson and John Goodman’s characters, are looking for trouble. Brenna, Goodman’s character, wants to find Kong and Packard, Jackson’s character, is a Vietnam general who can’t seem to find any other reason to go on without a war against someone, or in this case, something. By the way, this is my favorite performance from Samuel L. Jackson ever. I am not even kidding. He portrays the aspect I mentioned about a war hungry veteran general amazingly. Again, I do care about the characters in the new one, and their performances are all solid, particularly John C. Reilly who was the best part of the movie, but the characters in the old version are just normal people who want to make it off this insane island. Point goes to the old.

Story should always be the priority in a movie, but in the case of a movie like this, the important thing in a King Kong movie is King Kong. Now much like Skull Island and the creatures, these are very different iterations of Kong. I love both these iterations, but for different reasons. Both have a sort of god complex, but they have very different god complexes. Peter Jackson’s version is under the impression that no one should even attempt to challenge him. He is king and things go his way. The new version however is determined to protect. His mindset is that this is his kingdom and it’s his responsibility to protect its inhabitants from anything, specifically the Skull Crawlers, that would threaten them. Kong is more than just a god on Skull Island. He’s it’s defender and it’s champion. Not once in the Peter Jackson’s version do we see him save any other inhabitants of Skull Island. In fact the only interaction he has with other inhabitants in that movie are when he takes Ann, Naomi Watts character, and when he fights the T-Rex’s. But on the other hand, Peter Jackson’s version did kind of go through an arc. By the end of the film, Kong realizes that he’s not a god and he develops compassion for Ann because, despite her fear, she eventually also develops compassion for Kong, and in the end, Kong makes the ultimate sacrifice. But in the end, I rooted for the new version more. Point goes to the new.

So in the end, I can’t really decide which I liked better. When I first decided to do this, I was going to give the win to the old. But the more I thought about it, I realized I hold them both in equal regard. Both are great for different reasons. I would recommend either film. If you want a more suspenseful survival thriller type film, I’d recommend the Peter Jackson version. But if you want something a little more action oriented but still with some suspense, I’d recommend the new film. Both films get 4.5/5 Skulls.

You thought I was gonna say bananas didn’t you? Anyway, next time, it’s time for a nostalgia trip, as we see how the new incarnation of the teenagers with attitude holds up.