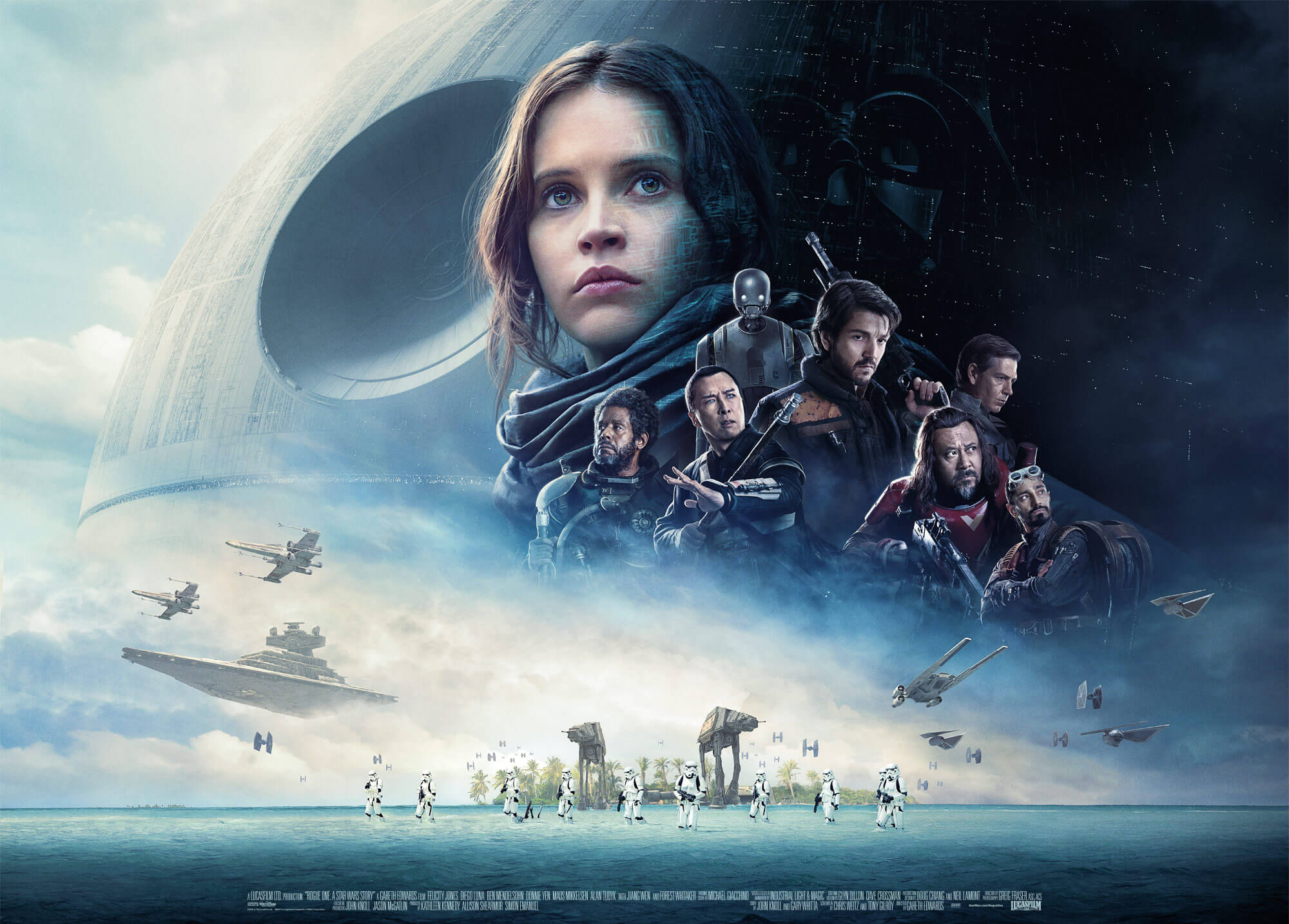 The Star Wars Universe is a big place. There are adventures before, in between and during the saga that have yet to be told. There are stories untold that are yet to be. The Skywalker family story is great and we love it. But there are dozens, if not hundreds of other characters that deserve to have there stories told. Welcome my friends to the first Star Wars Anthology film, Rogue One: A Star Wars Story. A story (That’s gonna be the constant word for this review isn’t it?) that literally takes place right before the beginning of the original Star Wars.

This was a genuine risk for Lucasfilm. On the one hand, it’s technically a prequel and you all know what the reaction was the last time, or would it be considered 3, that was attempted. And again, this is deviating from the Skywalker family story. Apart from Darth Vader, who isn’t in the very long by the way so manage your expectations about him, there are no members of the Skywalker family. This movie was a way of testing the waters to see if people would still see and more importantly be interested and enjoy a movie that isn’t part of the main saga. So does it succeed? Well, let’s look at the setup. The film centers around a group of the group of rebels that stole the Death Star plans. And Holy Crap was this an awesome movie!

Let’s get the one negative out of the way. Though it diminishes after you see it a time or two more. When I first saw it, the pacing in the first hour of so was kind of choppy. But it’s yet another instance of when I saw it again, I went “Wait what was my issue?”

Now that we got that out of the way, this movie kicks all sorts of behind. First off, the tone is great. This looks and feels like a genuine war movie. This probably the darkest Star Wars movie we’ve seen since ESB. There’s just this nice bit of grit to the way the film looks. That leads into the next positive. While I’m hesitant to call this the best Star Wars movie ever (though trust me. It’s high. It’s very high.), it’s most definitely the best shot. The cinematography in this movie is beautiful. The film looks and feels big, which is what you’d expect from the guy who directed the last Godzilla movie.

The acting is fantastic. All the cast does a stellar job. Felicity Jones Is fantastic as usual. Diego Luna had a great intensity to him. Ben Mendohlson makes a great antagonist. Forest Whitaker was fun. But the two standouts to me are Donnie Yen as Chirrut Imwe and Alan Tudyk as K-2S0. Both of them have some of the best lines and moments in the movie. I even quoted part of one earlier in the review. It’s hard to go into detail about a lot of the characters without spoiling it but trust me. Everyone is great in this.

The action is also some of, if not the best in all of Star Wars. The space battle is the best one of all the Star Wars movies. This movie is a must see in IMAX 3D for the ending battle alone. And oh the final Vader scene. Just… Yes.

Rogue One truly is the best prequel to the original Star Wars trilogy you could ask for and it shows that taking a risk like this movie can pay off so long as you have an engaging story, great acting and fun action. It delivers everything a movie like it should. It will get you amped up but it’ll make you cry at times too. Im still not quite sure where I rank it among the other films, but it’s definitely up there with ESB and TFA. Rogue One: A Star Wars Story gets 5/5 Kyber Crystals.

So Lucasfilm, when are we getting the Darth Vader Anthology film set after ROTS? Anyway, here’s a link to a really cool song someone wrote for the movie.